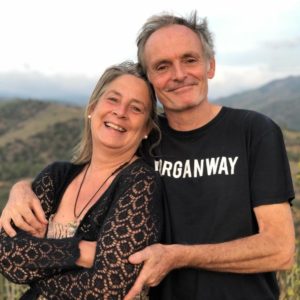 Maggie and Martin at Mother’s Garden

There are so many great stories about the amazing people in the olive oil world that I have decided to highlight some of them from time to time.

The first in the series concentrates on Martin and Maggie who have developed and marketed the excellent Mother’s Garden brand of extra virgin olive oil (known in the US as Veritat, which in Catalan means “truth”).  The couple moved to the Priorat Mountains south of Barcelona in January 2001 – you may have seen them featured in Channel 4’s No Going Back  in the early  years of their adventure.  They proceeded to set up a thriving farm growing vines and almonds as well as olives.  Then in 2003 they decided that they wanted more people to know about the excellent oil which was pressed from olives grown on their farm and others in the area.  They have gone from strength of strength over the last 16 years consolidating the sales of their oil in the UK and then, in 2017 introducing it to the US working with Veritat founder, the sommelier Julie Harnish who lived in Catalonia for many years..

Mother’s Garden extra virgin olive oil can be relied upon to offer attractive fruity flavours even in years when the conditions are less than favourable.  Martin and Maggie are passionate about their product and campaign hard to raise awareness of how olive juice freshness is just as vital as full provenance and quality.   They aim to bring the best olive oil to people at a responsible price.  To do this they concentrate mainly on direct selling off their website and though hubs (see below).  The oil is also available in ten selected outlets across the UK such as Honey and Spice in London’s Warren Street. 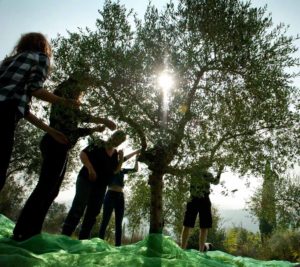 The oil comes in 500ml bottles or 3 litre tins. Thanks to a concern for the environment the latter have recently been introduced to replace the 2 and 5 litre plastic bottles that were used before.   Orders can be taken online for deliveries to the UK, and to all of Europe and beyond.  Martin tells me that delivery prices have had to be increased as transport costs have gone up significantly and so now the flat rate delivery charge is now £12.75.  For full details check the website.

To avoid the flat rate delivery charge join one of the existing hubs which have already been set up in the UK or organise your own hub with family and friends.    A hub is a food-wise group of people; family members, friends, colleagues or neighbours, who coordinate an order and share one delivery to one address; home or business.  Mothers’ Garden deal with the hub direct and every member of the hub receives an invoice.   To learn more about hubs email Martin at <mothersgarden.es@gmail.com>

Free delivery is offered for a minimum order of £125+ so if five of you order a 3 litre tin each there will be no delivery charge and you will purchase the oil for as little as £9.00 a litre. This is less than the half the price at which a litre retails in the select shops that stock Mothers’ Garden olive oil – so it’s a great bargain.   NB. Please note that free delivery is not available outside mainland Britain.

Finally you can learn more about Mother’s Garden oil at a special event at Honey and Spice in London on Monday 25th February.  Martin and Maggie will talk about their work and offer their oil for tasting.  Places are £28 and include a glass of wine and food cooked using the oil. Freshly pressed Mother’s Garden olive oil will be available to purchase on the night. 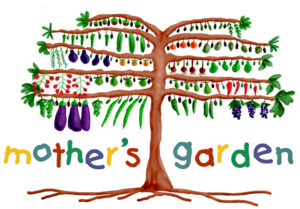