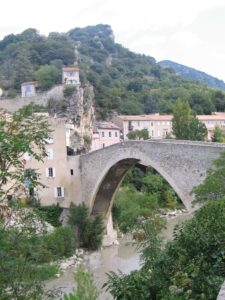 The Roman bridge at Nyons

This is the first of a series of posts about some of the olive trails and routes that I have followed during my travels around the olive oil world. It covers the region of Les Baronnies in the Drome, the most northerly department of Provence.  The area takes its name from the local hills but it was never official.  It was the first olive producing area in France to be granted an Appellation d’Origine (now a PDO) for its olives and olive oil. Its villages include Buis les Baronnies and Mirabel au Baronnies but Nyons is the major town and gives its name to the Appellation.

Nyons is tucked away up the valley of the Aygues and to find it you must leave the main north-south A6 route down the Rhone valley and head up the D94 into the Drome.  At first the road runs through acres and acres of vineyards with rose bushes at the ends of each row to show up the first signs of mildew. In early summer the vineyards are a riot of colour and the air is rich with their fragrance.  Later in the year the scent of lavender takes over, wafting down from hillside fields turned purple with this attractive commercial crop.

It is not until you are almost in Nyons that you suddenly spot the olive trees.  This is because it is only Nyons and its surrounds that enjoy a particular micro-climate which gives many more days of sunshine than is usual in the Drome.  The surrounding hills also protect from the summer Mistral.  A single olive variety, the Tanche, takes advantage of this microclimate.  It is a hardy breed found only in this area and it can withstand the winter frosts of the region. 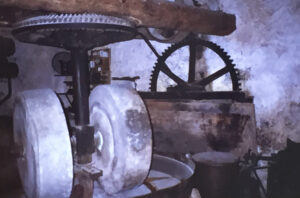 Nyons is an ancient town and olives have been processed here for centuries. One of the attractions is Le Vieux Moulin.  This is actually made up of two olive mills; one built in 1850 and one even older mill u

nderground which is now a museum.  The mills are situated by the Roman bridge in Nyons and were both water power.  There is also a more comprehensive museum at the Institute du Monde de l’Olivier in the main square, the Place de la Liberation.  As well as touring the museum, visitors here can taste five French oils and discover their aromatic diversity.

Today, much of the region’s olive crop goes to Les Vignoles co-operative in the centre of the town.   This is well worth a visit as there is a shop selling a wide range of local produce and another museum.  There are also a number of privately owned mills, such as Moulin Autraud-Dozol, that also sell olive oil direct to the public. 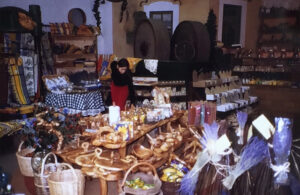 The shop at Co-op sells a range of local produce

Oils pressed from the local Tanche olive are usually very delicate in character.  They have very little bitterness and only a low level of pepperiness. Their flavour tones include soft apple and pears with some nuts and a touch of very light citrus.  The Tanche olive naturally produces gentle oils and the PDF regulations do not allow for the harvest until quite light in the year and so the olives are usually fully ripe when they are picked.  If you want to see the harvest in full swing do not arrive in Nyons until after the 7th December.  Make sure you buy some oil while you are here as Nyons oil is very difficult to source in the UK.  Amazon sometimes has some for sale.

For an even more active experience of the Nyons olive you can follow the four kilometres Sentier des Oliviers a Nyons.  This footpath is punctuated with informative panels which tell you more about the olive tree and its history.  Start from the Baronnies Tourist office in the Place de la Liberation.

About a third of the crop reach the larger size required for table olives.  Those that do are cured in the traditional manner by soaking them in fresh brine with 20% of the previous year’s brine mixed in.  Six to eight months later the olives will be ready to eat.  So the little bowl of black olives which inevitably comes with any drinks will be from the previous year’s harvest.  However, if you visit Nyons in December you will find the local speciality “olives Piquees”.  Fresh olives are pierced all over and layered with salt.  They are turned regularly for ten days until they are ready to eat.  Enjoy them while you can as they do not keep.

The culmination of the olive harvest is marked by the Alicoque or Fete de l’Huile Nouvelle in late February.  Everyone takes to the streets of Nyons for an open air tasting of the new oil and the olives piques.   The celebrations open with a race round the old town and a procession of farm vehicles carrying the growers.  Then the French passion for interminable speeches is given full reign as local dignitary follows local dignitary.  Finally, the tasting takes place with plenty of local wine to wash it all down.  The event is organised by the Nyons Confrerie des Chevaliers de Olivier who have their own large stall in the Place 18th June. Look out for the distinctive olive and dark green costumes of the confreres.  They also have special hats with a sprig of olive twigs in the band.

All 500 members of the Confrerie have sworn to defend the olive by their word, writings and actions.  At the inaugural ceremony new members eat an olive, down a glass of the local wine and make their vows.  The Grand Master dubbs them with an olive branch.  The inauguration ceremonies are held not at the Alicoque but at the Fete des Olivades in July.   This is much more of a tourist event than the Alicoque and there is plenty to do.  The olive is celebrated through cultural activities and the arts.  The museums put on special displays and there are musical events, painting exhibitions and dancing.

Previous Post: « A Taste of Catalonia
Next Post: GFW Awards: The Winners and the Best of the Rest »