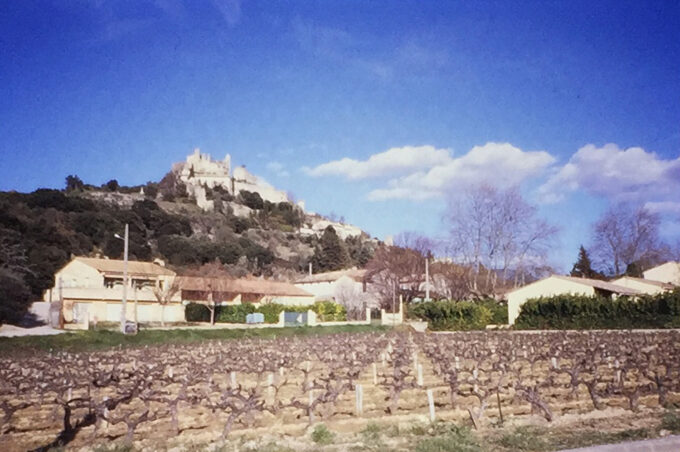 The start of the Routes des Oliviers

My first post about this region concentrated on Nyons itself.  This time I shall be travelling round the Route des Oliviers from Nyons taking in the villages of Mirabel les Baronnies, Mollans sur Ovese, Buis Les Baronnies and Entrechaux.

There are 61 villages included in the Nyons Appellation and they all grow the Tanche olive. However, if you look carefully at the trees you will find that a different variety has been planted at the end of each row.  This is the Cayons olive and it is there to pollinate the Tanche.  The fruit of the two trees must be harvested separately for the Appellation laws do not allow the Cayons to be included in the mix.  In fact, Cayons olives produce an interesting oil in its own right with a pronounced tomato aroma but you will not find it on sale.  It is strictly for home consumption. 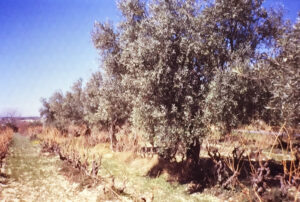 Sometimes the olive groves are planted alone but in other areas, such as that around Venerol just outside Nyons, you will find vines and olive trees planted together in the same field.  The scenery of the region varies from the mixed farming around Mirabel Les Baronnies with the snow covered Mount Ventoux in the background to the rugged landscape of the Col d’Eye between Buis Les Baronnies and Nyons.

I started my trip by taking the D538 from Nyons towards Mirabel Les Baronnies to the south west. This is one of the designated villages and there are plenty of olive groves to see.  The Route des Oliviers is well signposted and illustrated at intervals with information points and maps.  There are also signs to the different growers such as those of growers Jean-Claude Bayle and Paul Farnoux.  The Farnoux family used to own the mill in Mirabel village but this had to closed in the early 2000s and now houses a museum.  A new mill has opened in nearby Puymeras.

From here I took a short diversion from the Route des Oliviers to go to a wine and olive oil tasting at the Abbeye Bouchet in Bouchet Village to the West of Mirabel.  The Abbey was once a Cistercian nunnery but has undergone many changes over the years. This was my first initiation into the gentle  flavours of Tanche olive oil, tasting oils from eight villages.  Though it is the same olive variety that is pressed throughout there are subtle differences in fruity tones and in the degree of delicacy. 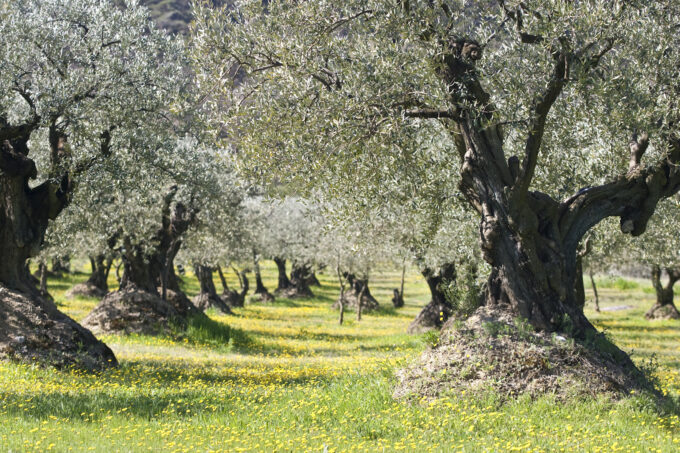 Next, on to the quaint old village of Mollans sur Ouveze, set above the river Ouveze that runs up the Valley to Buis and beyond.  Fruit is the main crop here with the olive fruit an important part of the mix.  Jacquet Chauvet and his family have been represented here for many years, owning olive groves and one of the local mills.  From April to September he turns the mill into a shop and sells his oils here to passing tourists on their way to the Roman ruins at Vaison la Romaine.

The Baronnies region abounds with local markets and Buis Les Baronnies is no exception.  Visit the Marche des Producteurs every Wednesday and Saturday in the Place des Arcades and the Marche  Hebdemadaire every Wednesday morning.  The town is also famous for its Tileul or linden trees, infusions of the flowers of which are said to very beneficial to the health. The Tileul Festival in July celebrates the produce of the tree with samples, information and tastings.  This is also the centre of music in the region with festivals featuring both classical music and jazz. 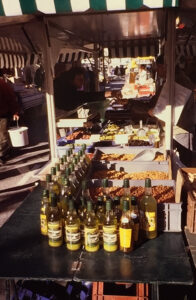 Local markets abound in the region

Tapenade and other local food

My final stop was in Entrechaux, south of Buis Les Baronnies, where I went to visit a small family business at the Domaine des Amarens.  Oliverie des Baronnies produces Tapenade from both black and green olives. Tapeno is the old Provencale word for capers and this wonderfully aromatic paste of black olives is liberally flavoured with these little buds and the inevitable secret mix of herbs,  probably including bay, savoury and thyme. In Provence, anchovies are not usually added to the tapenade and many producers are adamant that Tapenade with anchovies is Anchoiade.  But not everyone agrees.  Both 18th century and modern recipes for Nicoise Tapenade, traditional in the south, do include anchovies so if you are vegetarian read the ingredients carefully.

Tapenade will probably turn up in local restaurants in simple snacks such as tapenade toast or mixed with tuna to make a stuffing for tomatoes or in more substantial dishes such as a tapenade omelette or a Daube Provencale where it is traditional to give the finishing touches.  For the best results at home add the Tapenade during the last five minutes of the cooking time.

Some of the other foods to look out for on your travels include local honey, truffles, Picodon goat’s cheese and Crespeou.  The latter is local speciality in and around Mirabel Les Baronnies that has spread out to other nearby areas of Provence.   It is essentially a layered cake of individually flavoured  omelettes.  Game is important in the Nyons region with wild boar, mountain goat, rabbit and hare on the menu in season.