Just heard a great story from Andy Swinscoe at The Courtyard Dairy in Settle about the creation of a traditional unpasteurised goats cheese on a farm in the Pennines near to Hebden Bridge.  The cheese won Best Raw Milk Cheese at the Great Yorkshire Show.

Gillian Clough farms only ten acres (that’s just two-fields!) on the Pennines hills overlooking Hebden Bridge.  Two years ago she bought a couple of pedigree Anglo Nubian (big floppy eared) goats because she loves these animals and she thought they might help make sustainable the smallholding she runs with her husband, Tim.

Breeding these goats soon created a useful by-product – plenty of goats’ milk.  Gillian decided to partner with The Courtyard Dairy and use her goats’ milk to develop something really special, which would showcase her farm.  Anglo Nubian goats are renowned for producing some of the best quality milk, and by grazing them on Gillian’s smallholding of marginal pastureland it was surely possible to make a fabulous unpasteurised Yorkshire goats’ cheese that they could be justifiably proud of.

The best course seemed to be to follow a traditional lactic-set cheese recipe.  This seemed a good idea because the lactic-set cheese-making style is naturally suited to the nature of goats’ milk, like the classic French goats’ cheeses – Crottin and Ste Maure – and would also suit Gillian’s lifestyle.  This style of cheese originally developed in France to fit in with smallholdings, because making the cheese is less labour-intensive and it sets slowly over a long time.  This allowed the farmer to milk the goats in the morning, and then attend to other farm tasks in the day (such as, in France, looking after the vines) before gently ladling the curds in the evening/next morning into moulds.  Much less labour intensive than hard cheese production like Cheddar, etc., which requires you to be working the curd all day.

Gillian’s smallholding is quite small, so she also has a day job.  The lactic-set cheese would fit into her routine of getting up and milking the eight goats by hand before going to her work as a Radiography lecturer.  The curd is left to do its own thing throughout the day, and next morning the slowly-acidified curd is ladled into moulds. 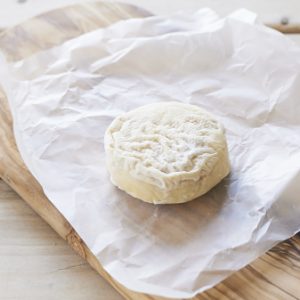 Once this recipe was chosen, Gillian developed her recipe using the milk from just two goats, making slight alterations bit by bit, including longer acidification, a different pH at moulding and changing the starter bacteria – constantly tweaking the recipe and experimenting with different strains of bacteria and yeasts imported from France, to get the desired rind and flavours in the final cheese.  Gillian and The Courtyard Dairy travelled 400 miles to visit Neal’s Yard Creamery, makers of the fabulous goats’ cheeses Dorstone and Ragstone, so Gillian could pick their brains and get tips onto how to construct a proper drying and ageing room for the new cheese.

It’s taken a long time finally to reach the goal.  But now, in July 2016, Gillian is producing the quality cheese everyone was looking for: Hebden Goat is a delightful, small, fresh, lactic goats’ milk cheese with a natural rind.  And Gillian has been persuaded to double her herd size to eight goats.  So that means 40 cheeses a week to go around – not many, but enough for quite a few to enjoy this special Yorkshire treat.

All credit to Gillian and Tim: they’ve developed a fantastic unpasteurised cheese that is a welcome addition to the farmhouse cheese world.  Buy it from the Courtyard Dairy