I first met Charles Carey – The Oil Merchant – when I was still earning my living mainly as a wine writer and was only just starting to take an interest in olive oil.   He organised a tasting for the Circle of Wine Writers which I attended and we kept in touch. He became a real mentor when I started to  learn about the intricacies of the olive oil world.

Harvesting on the Vea estates

The Vea extra virgin olive oils have been on sale in the Uk since the 1980’s when Charles Carey first imported them and I have known them for almost as long.  Charles told me that he discovered them at one of the first IFE’s at Olympia in the nineteen eighties.  “At just that time Selfridges were organising a Spanish promotion and I offered to supply the Vea range for that”, Charles explained.  At the time he only had a few oils on his list so Vea were in at the beginning and the relationship has continued ever since.  Charles was one of the very first people to specialise in the importation of fine olive oils and has been leading the field ever since

The Vea family olive groves are located near to Sarocca di Llerida on the western edge of the central valley of Catalonia. On my first visit I was struck by the severity of the landscape.  The climate is very dry and there are deep gorges and dry torrents. The unevenness of the land is organised through a series of terraces built hundreds of years ago. The olive tree is visible everywhere, mixed in with the natural rather scrubby vegetation of wild hawthorn and some scattered holm oak forests.

Processing is meticulous with great attention to detail.  The company uses a special decanter composed to two different bodies that run at different speeds.  The system speeds up the extraction time as well as reducing the temparatures in the decanter, thus reducing oxidation.  The result is a really high quality oil.

Inside the Vea extraction plant

L’Estornell extra virgin olive oil is pressed only from olives from the Vea certified organic groves.  It is named for the birds which are prevalent in the organic groves.  “Always leave some olives for the birds or they will choose the best for themselves” Avelino Vea said to me during my visit.  Vea also produce a range of extra virgin oils under the band name of Lerida.  The current oil from the 2019 harvest is quite delicate in character but with some complexity starting with meadowsweet straw and citrus fruits in the aromas, moving to a salad bowl of soft leaves and culiary herbs in the mouth and ending with more greenery with sweet bananas.

A Feast from the land

As is so often the case in my records of visits to the growers over the years, the meals I enjoyed take up quite a lot of space and the notes on my very first visit to the Vea estate and the Lerida region are no different.

I was part of a group of a dozen or so food writers and journalists and after walking the groves for some time we ended up at the Hermitage for a local village saint; St. Andonio of La Granadella.  Any one can hire the venue and make and serve their own meal with the help of a local guy that cooks on the huge open fire outside.  We were served a wonderful country-style meal based on the local produce of the countryside.

The lunch started with roughly toasted bread served with plenty of the new season’s olive oil to sample. This was followed by snails cooked in 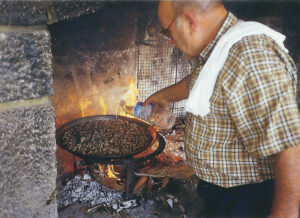 Cooking snails over an open fire on the Vea estates

a large flatish iron pan placed over the open flames of the fire.  Snails are everywhere in this region but they are very expensive to buy in the shops or to order in restaurants so it is a national pastime go out collecting them in the countryside when it rains. The snails are sprinkled liberally with salt and cooked in their own juices.  They are traditionally served with a sauce of fresh garlic crushed with more olive oil. I do not think that many of my fellow jouralists really appreciated the snails but they were eagerly eaten up by the estate workers and myself!

The meal continued with rabbit joints grilled until crisp and served with plates of grilled peppers and aubergines in more olive oil, but served separately not in the threaded pattern you sometimes see in the Escalavida found in many in Catalonian restaurants. Small local sausages also appeared from the grill accompanied by grilled baby artichokes with aioli.  Dessert was made up of a selection of all kinds of almonds – roasted, sugared and toffee – along with hazelnut merangues.

L’Estornell is on sale in Booths in the North East, Selfridges in London and in a number of small delicatessen and specialist shops around the country.  Check with the Oil Merchant for stockist  om@oilmerchant.co.uk