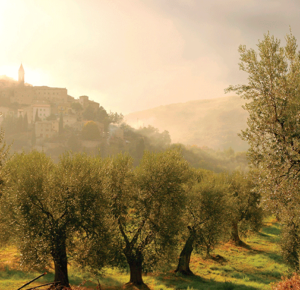 The small town of Seggiano is tucked away at the foot of Monte Amiata in the Grosetto region of south western Tuscany.  It is still quite a wild area somewhat off the Tuscan beaten tourist track. The mountain is volcanic and there are numerous hot pools which the locals say are great for swimming even in the coldest weather.  The landscape is varied with beech woods planted towards the top of the hills.  These give way to chestnut trees and then to olive groves and finally to vineyards on the lower slopes.  Sheep wander the mountain side and through the olive groves, their tinkling bells adding to the atmosphere.

The church was responsible for the careful planning of the landscape and the ancient groves.  The monks introduced the Olevastra olive variety from Dalmatia and this variety is not found in any other part of Italy.  They chose Olevastra because of its capacity to withstand the cold and the groves they planted are set above the normal olive tree line of 500 metres.  The first mention of the use of Olevastra in the region goes back to Abbot San Salvatore in the 10th century. This history is reflected in the groves where some of the trees are extremely old and gnarled with split trunks and sprawling branches.

The town was founded in the early middle ages by the monks of the local monastery, but traces of human settlement here date back to Etruscan times.  In the thirteenth century the administration of Sggiano was taken over by the republic of Sienna. Over the years the area moved into the jurisdiction of the Duchy of Tuscany and the Papal state.

My first visit to Monte Amiata took me to Podere Vignone where David Harrison and his partner Peri cultivate an olive grove of around 360 Olevastra trees, pressing the fruit for oil. This home-grown product formed the basis for their company Peregrine Trading which now specialises not only in extra virgin olive oils but also in a range of artisan foods based on producers in the Seggiano region. The product list includes olive pastes, pesto sauce, vegetables in olive oil, biscuits, honey and cheese.  David also sources first class oil from other leading olive oil producing regions of Italy such as Sicily and Puglia.  Visit their website to see the full range.

On my second visit to the region the harvest was in full swing with David working in the groves with his team of pickers.  All the harvesting was, unusually, being done by hand.  The phrase “hand picked” usually refers to the use of hand held rakes or even hand held vibrators but at Podere Vignone David and his team bandage their fingers to protect them and use their hands alone.  Until relatively recently David’s oil was branded “Seggiano” and used his own olives along with olives from selected nearby farms.

About four years ago the DOP region of Seggiano was establised and Davd had to change the brand name of his oil.  It is now sold under the 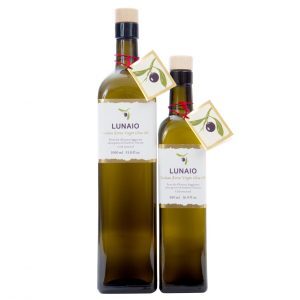 name of Lunaio which is a local nickname for the people of Seggiano.  The oil has an attractive flavour which is very different from majority of the Tuscan oils which are pressed from other varieties.  It is less aggressive but still has an attractive fresh and fruity taste.  The aromas offer apple skins and herbs along with a touch of nuts and lemons.  It is a great oil to use for all kinds of culinary applications.

My memories of Seggiano include a wonderful dinner at the farm cooked by David and his team of pickers after a long day in the grove. Thick and juicy steaks were served with plenty of fried potatoes and tossed salad glistening with the new oil.  Podere Vignone was the first place that I tried chunks of mature Pecorino cheese served with baby broad beans fresh from their pods but I think that this was on an earlier visit!

At dinner one of the team of harvesters was mulling over where he might go next, fantasizing that Napal would be great place to backpack and pick olives.  “Why not” I said, to his surprise.   “There is an olive grove established in Napal and I can give you the email contact details.”  This I did, but I never learnt if he followed it up!