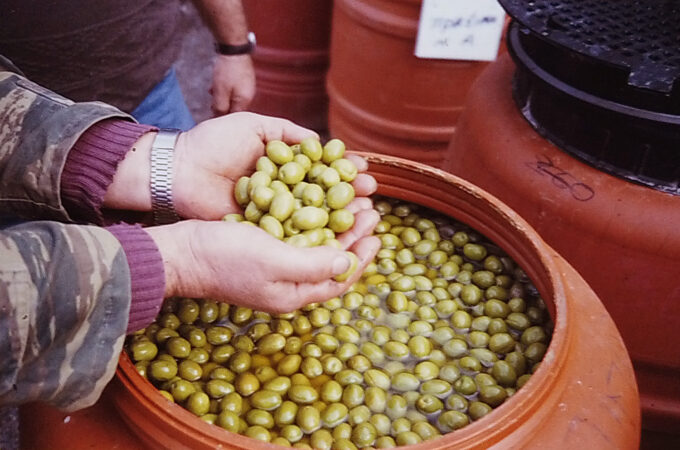 My memories this week go back to the very early days of my work with olives and olive oil not very long after I had retrained to switch from wine writing to olive oil in the early 1990s.  I had written a paper for the then European Union on assessing and describing extra virgin olive oil and at the launch I met Panos Manuelides who had recently set up his company, Odysea, importing artisan products from Greece.

His very first product offering was not olive oil but table olives from the agricultural co-operative of Rovies on the picturesque island of Evia on the Aegean Sea.  Panos had known the company since boyhood and had the idea of asking them to create a range of marinated and flavoured olive mixes which he had developed for sale in London’s Portobello market.  The new range sold very well in Harvey Nichols and eventually in Sainsburys and Panos’s business was on the road.

Not long after this I planned a visit to a number of producers with olive groves on the Greek mainland and asked Panos to introduce me to some of his suppliers.  This he was happy to do and suggested that we should include Rovies in the tour.

Evia is an easy island to visit.  A 45 minute drive from Athens takes you to Chalkida where two bridges connect the mainland to the northern part of the island. The village of Rovies is a seaside resort, set a little further to the north. The Rovies groves are planted in a v-shaped valley heading inland from the coast. 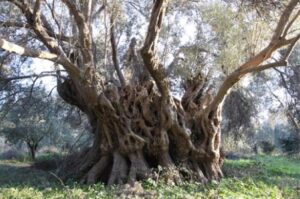 There is a breathtaking array of olive trees that spread as far as the eye can see down to the crystal clear waters of the Aegean Sea.  Its seaside position coupled with the shelter provided by the rugged mountains to the north, gives the grove the perfect surroundings and ideal micro-climate for the cultivation of premium Greek olives.

The Rovies co-operative was once a single estate (350 hectares) owned by five or so people and was  planted in 1923 by the grandfather of one of the members.   There are now around 140 members with some 80 farmers. The co-operative owns the mill and the the table olive processing and stuffing operation.  They buy all the olives from the member farmers.

In the early days there were some old abandoned olive trees at Rovies and a just a few of them remain.  They are said to be at least 1,000 years old, could even be 2,000.  However, the early members of the co-operative brought in roots and stumps from a nearby grove and started to graft different varieties to them.  A diary of the plantings still exists today.  Different parts of the grove look quite different depending on the varieties present and the method of pruning. Large Kalamata trees, for example, look quite wild as they do not get too much pruning here.  In other areas they are usually pruned more.  Conservolia was of the early table olive varieties to be added to the grove and then Koroneiki.  Other varieties include Kothreiki table olive and an olive which they call the Spanish Variety 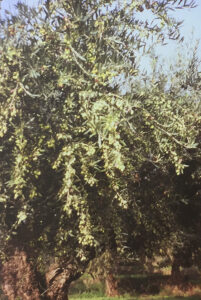 which is a large olive similar to Gordal. The vast majority of the grove has been certified organic. Natural fertilisers are only ever used and pests are controlled solely by environmentally friendly mechanical traps and not by chemical sprays.

Rovies is one of a handful of groves that continues to harvest their olives by hand. This traditional method reduces the likelihood of bruising and damage to the fruit. The table olives are picked by women with baskets hanging round their necks.  No rakes or sticks.  I have not seen very many places that still have genuinely hand picked table olives.

The olives are washed, cured and eventually stuffed and packed all on site.  Caustic soda is no longer used in the curing of Rovies table olives. Some olives are cracked, but most are packed whole in brine and then left to ferment for 2-3 months depending on the speed of fermentation.   When fermentation is complete the olives can be exposed to air and they will not change colour.  They stay in the vats and are packed to order.

Stuffing is by hand.  The olives are stoned with a machine which takes the olives one by one and makes a small cut and pushes the stone out 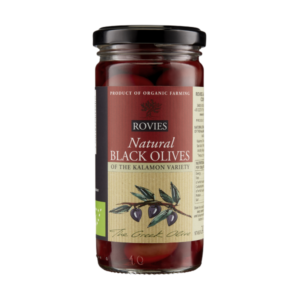 with a little nail like hammer head.  It can stone 1,000 olives per minute.  The olives may be left or stuffed, either way they go to a sorting table where any faulty ones are picked out by hand.  All the stuffings are natural – real pieces of pimento, almonds, cloves of garlic etc.

As always my memories are full of food and those of Evia are no exception.  One of my favourite dishes was a chicken and lamb filo pastry pie flavoured with cinnamon and cloves.  Sweet onions are fried in olive oil with the meat and spices until the mixture purees.  This is then used to fill the pies.  This is actually a village recipe for a New Year pie and will have a sprig of olive leaves or an olive set in the top and coin in it for good luck.

Panos and his friends took me to a charming a restaurant in the mountain village of Kokkinomilia, really high above the oak forests.  The menu was made up of the day’s market shopping and local delicacies, including homemade retsina (dry and delicious no sign of oxidation and a very aromatic and distinctive taste, far better than any retsina I have had before) with the resin collected from the local forests. 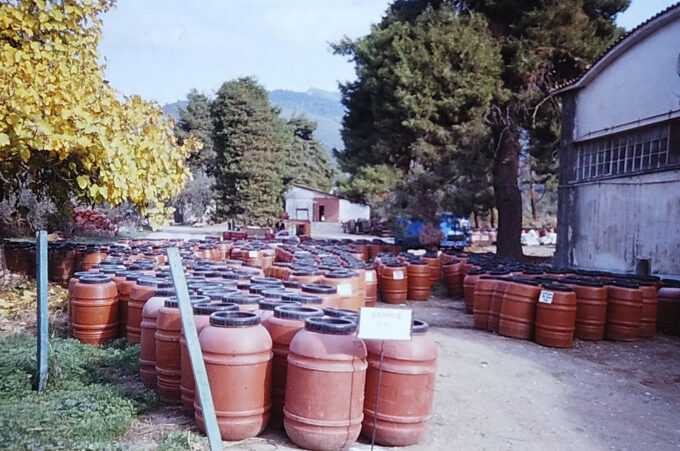 Olives curing in the sun at Rovies

Collecting this is one of the ways the local people earn a living, though many of them have felt the village which has been taken over by townies who want a rural retreat.  It is the same story in so many places.

I think that this was the first time I experience an egg fried in olive oil and realised that it was much more like a lightly poached egg than a heavily fried egg cooked over a high heat.  It was great with the fluffy freshly home cooked bread. We Followed this with simple spread of dishes including Riganato cheese with dried herbs, a shredded cabbage salad that was so fine it looked like a bowl of lace and Tiganopsomo, a flatter fried bread with cheese in the centre and herbs on the top.  Next came a bean broth, red with mixed vegetables, and finally a mountain of lamb sausages and baby lamb chops.

Some other highlights of the trip included a little parcel of cabbage stuffed with apples and a classic Greek lemon sauce. Wild mushrooms fried in a spicy, crispy batter, aubergine puree with tahini paste and a hot paprika cheese dip.