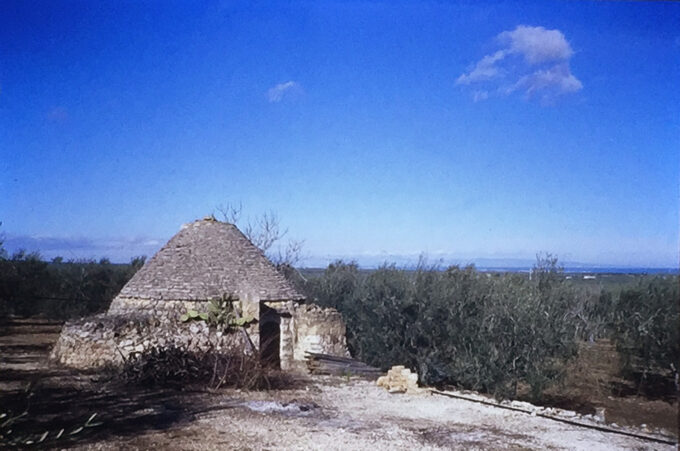 Puglia, which takes up most of the heel and toe of Italy, is one of my favourite regions of Italy.  I love the food and the independent spirit of the people.  It is also a great place for a holiday. The countryside is extremely varied and the history fascinating and though there are plenty of interesting places to stay it is not overrun with tourists as is so much of northern and central Italy.

Sometime known as “the table of Italy” parts of northern Puglia are very flat.  Here vast fields of grain lie alongside the olive groves, vineyards, and farms growing tomatoes and an array of other vegetables.  It is particularly important in the production of Italian olive oil, accounting for a large proportion of the total crop.  Much of the olive oil production in here is small scale.  It has been estimated that there are around 800 olive presses north of Bari serving the many local farmers.  Traditionally it has been easier for them to sell to the big packers rather than try to market their own oils.  The emphasis was on quantity rather than quality.  However, things are changing as the emphasis moves toward quality oils and quite a few small producers are beginning to commercialise their own oils.

One of the focal points for olive oil in northern Puglia is the town of San Servero sometimes known as the “Citta del Olio”.  It is surrounded by olive groves and vineyards and even the latter are utilised by the olive farmers. Olive trees have been planted round the perimeters of the vineyards and along each side of the little roads that run through the vines and up to the farms.  The most interesting olive variety in this area is Peranzano.  Look out for this variety on line;  it produces quite a robust oil with very herbaceous tones and a touch of tomatoes on the vine.

Driving east from here you will arrive at the Gargano Peninsula with its range of mountains, dropping down to the Adriatic. The olive groves here are said to be hundreds of years old and they look quite different to the tidy rows of trees round San Severo.  They remind me of the fairy tale forests of my childhood stories with ancient gnarled trees growing in wild profusion.  The groves, mainly planted with Ogliaolo olives, are to be found on the western slopes if the mountains facing away from the sea. The rest of the land is very barren with rocky outcrops and low lying scrub oak. 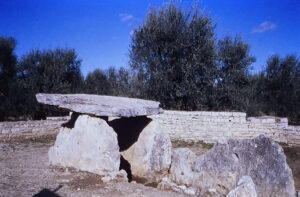 Ancient burial ground in the gorves

The Gargano is a very old inhabited area and contains some of the best archeological sites in southern Italy.  The roman road ran along the base of the mountains to Barletta where rich merchants had their summer villas.   A prominent producer with family groves on the slopes of the Gargano mountains today and  a mill near to Manfredoni is Oleara Clemente. This is a family run company which specialises in organic and DOP Dauro Gargano oils.

Moving south it is best to avoid Foggia with its rubbish lined roads leading  in and out of the rather messy town centre and drive on to the little seaside town of Barletta.  Here the vast salt flats north of the town at La Saline are worth a visit. Inland you will come to the small town of Andria and the Castel del Monte olive region.  The Pellegrino family have been growing olives here for many years but it was only in 1990 that they started to bottle their own Petraia and La Spineta extra virgin olive oils rather than sell to the large packers.  Coratina is the predominant olive variety in this region which gives the oils a deeply nutty and peppery flavour. Seven hectares in front of the mill are organic and these olives are used for Petraia.  La Spineta carries the Terra di Bari Castel del Monte DOP. Olive oil rustling has been a problem here with men storming the mill with guns and an ultra-strong suction machine that can suck the oil from a storage tank one and a half kilometers away!

An interesting and rather unusual olive variety found in this area is the Carolea.  This olive gives a very fruity flavour to the oil sometimes with an almost strawberry ice cream quality to the aromas.  I first tasted the oil at Tenuta Rasciatano, a lovely old masseria with its own chapel built in 1697.  To find it follow the little lanes and tracks of the Strada del Olio in between the Murgia hills and the sea. 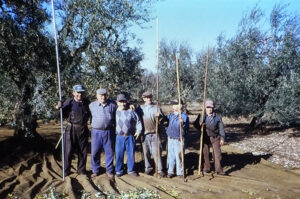 Harvest time in the Galantino groves

Last but not least of my finds in this area is the Galantino family business, based just north of Bari at Biscelle.   The olives which are pressed at the Galantino mill come from their own Contrada San Giovani and La Fenice estates and those of 200 other farmers in the Terra di Bari area.  The family act like wine negociants, helping their suppliers with decisions in the groves on cultivation, pruning and harvesting. The groves are all planted with Coratina and Ogliarolo varieties and some of them are reputed to be hundreds of years old.  Indeed the whole area is full of historical interest with ancient dolmens and the slightly more recent trulli houses.  These little circular buildings with distinctive conical rooves date back to the early fifteenth century. They are thought to have been built as temporary housing or as storage units.

Much of the best Puglian food is vegetarian.  Look out for orecchiette, small ear shaped pasta, tossed with cima di rapa and extra virgin olive oil. Try Galantino’s speciality oil: L’Affiorato with this or dipped with hunks of the long lasting Pane di Altamara.  Affiorato is the oil that naturally rises to the surface of the paste after milling and before pressing.  If you like cheese then Caciocavallo is a must along with Canestrato and Stracciatella.